Wow, Wall I’s favorite French existentialist sexpot, Laetitia Sadier, founding member and frontwoman of one of the greatest, most innovative bands of all time, Stereolab, is back with her second full length release, Silencio.  For much of the late 90’s-early 2000’s, Wall I was one part Nihilist (sans leather, but more lingonberry pancakes), one part Ras Trent (although I never had nappy ass ginger dreads like that dirty ass hippy Spin Laden), and one part black bloc anarchist on the streets of Thrillwaukee, with only one dream, to procreate with this lovely angel voiced beauty, while embracing the ethos of the untalented Pauly Shore, “nugs, chillin, and grindage.”  That’s all I cared about back in the day…..

Following up to 2010’s solo debut, The Trip, Laetitia is back with what made her world famous with Stereolab, that soothing, heavenly voice that has soothed the savage Wall I many a time, paired the simple lilting guitar riffs courtesy of former husband and Stereolab mad guitar genius Tim Gane.  This album is great, with lots of catchy grooves combined with politically and philosophically charged lyrics.  I can only thank Spin Laden for putting my first Stereolab album in my hands, Cobra and Phases Play Voltage in the Milky Night, while erstwhile frat brothers at our very own anti-greek house named RAD (Row Alpha Delta, our password was “Are you RAD?  No, I’M FUCKING RAD”).   I later escorted Spin Laden to one of many Stereolab shows I’ve seen over the years at the Vic Theater in Chicago, soon after the release of 2002’s Margerine Eclipse,  post-death of Stereolab angel Mary Hansen.  A definite favorite, as is her first solo album, 2010’s The Trip, also below.  Can’t wait to check her out Sept. 29th at the Der Rathskeller in Madison, WI!

Find Me the Pulse of the Universe – Laetitia Sadier 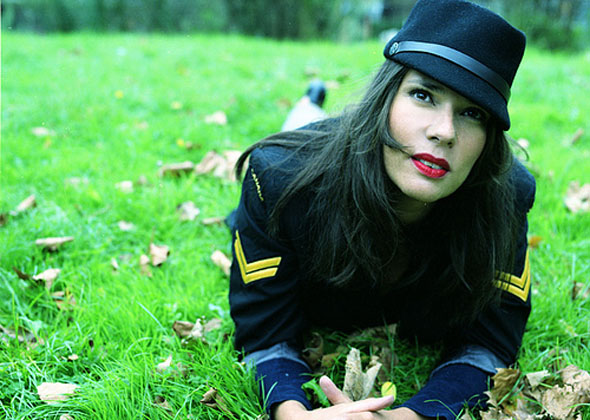 Auscultation to the Nation – Laetitia Sadier

Between Earth and Heaven – Laetitia Sadier

By The Sea – Laetitia Sadier