Controversy for rappers has never been a bad thing for sales, think N.W.A., Body Count, 2 Live Crew, etc.  Now Lil B the Based God has named his new album I’m Gay, and it has sparked controversy.  He has even received death threats.  Except I’m pretty sure that the pretty bitch is straight, at least he sure talks about pullin’ lots of babes.  So I guess that saying “I’m Gay” is purely for shock and awe.  It is an effective technique, lots of people are talking about it.  Ironically the album itself has a more serious and professional feel than any of Lil B’s past efforts.  Conscious rhymes, solid beats, political awareness, and minimal goofing off here.  All and all it makes for a solid effort.  With beats from Clams Casino and others, the roster of producers was hard at work to craft a titanic album, all the while contributing to other rappers project’s like Main Attrakionz.  If that wasn’t enough Lil B has the album up for free on his twitter/facebook pages…how generous.

“People been hitting me up like, ‘I’m gonna bash your head in,’ ‘you f—-t,’ ‘I’m gonna kill you,’ I’m not gonna stop and I’m not scared of anybody on earth. That’s why I [titled the album I’m Gay] and nobody gonna stop me.” Lil B on his death threats

Damn this boy’s got some guts and power, that is truly some courageous shit.  You go boy/girl/pretty bitch!  This is sure to be one of the best albums of the year.  Of course it will bring the hater’s out in full force, especially in the hyper-homophobic world of rap/hip hop.  Lupe praised his fearlessness and revolutionary thoughts, calling B a genius.  Things are changing.  In fact I think it is more intrusive to rap about money and guns these days, than it is to rap about sexuality. 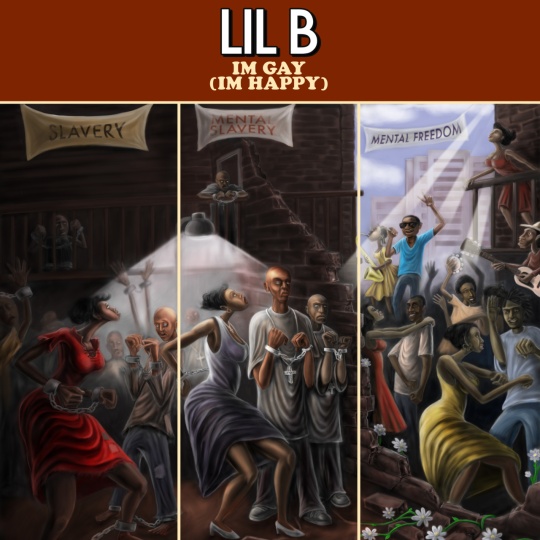 some bonus stuff, plus some older Lil B tracks:

You be the judge…